Episode 12 – How Much Should Kids Play Outside

How Much Should Kids Play Outside? 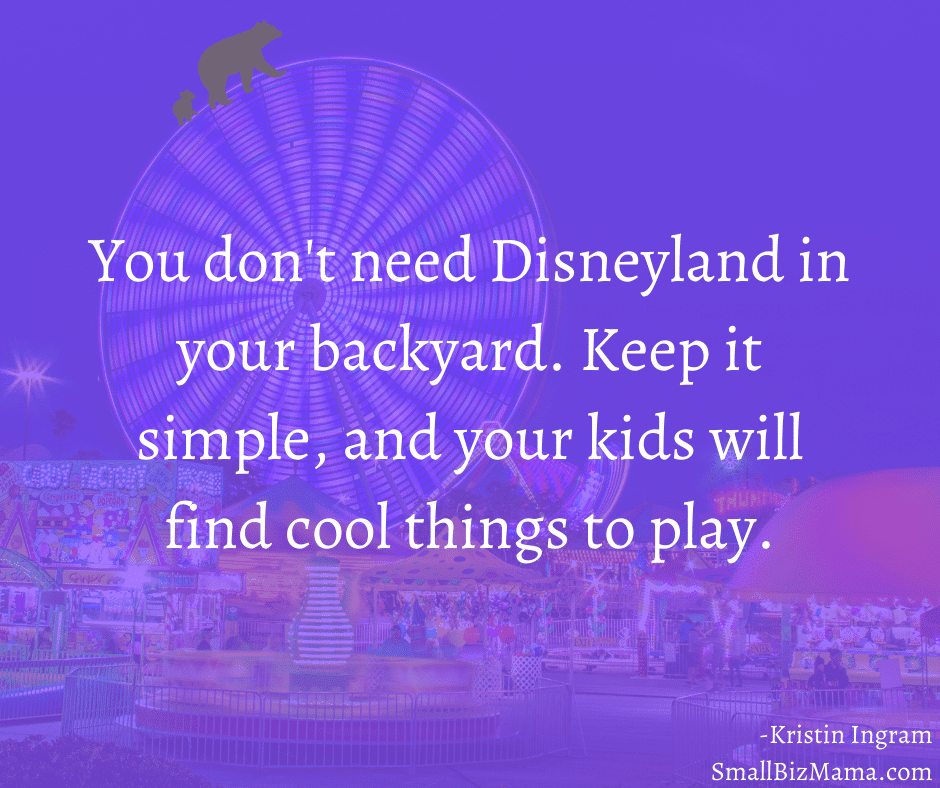 I know that with everything going on, for some of you, it's really hard to get your kids to play outside. You may live in a city, you may live in an area where there’s still social distancing and quarantining going on. But if you look at the research, having kids play outside is critically important to their development. When people asked me how much time kids should spend playing outside, my first thought is probably more than they are.

Sometimes we have a really hard time getting Erik to play outside because there's so much cool stuff inside that he wants to play with. But ideally, we have days on the weekend where Erik is outside all day long. We'll wake up, have breakfast, and then we'll go outside and play. We'll play in the garden, we'll play in the backyard, we'll go for walks, and we'll eat lunch outside. Then, he'll go in and take a nap. When he wakes up from his nap, we go back outside and play in the sprinkler. We don't have a pool, we don't have a jungle gym. We don't have a big playscape. He just plays in the yard. We have a couple of toys for him to play with. We have a little kids pool that is actually more of a sprinkler with a little bit of water he can splash around in. We have a garden. We've got some trees that he likes to investigate and poke at and play with. He likes the texture of the bark. He thinks that's pretty cool. But we don't have Disneyland in our backyard. It's pretty simple. He's found some really cool things that he likes to play with. So… you don't need to create a three-ring circus in your backyard.

Why is it important for kids to play outside? 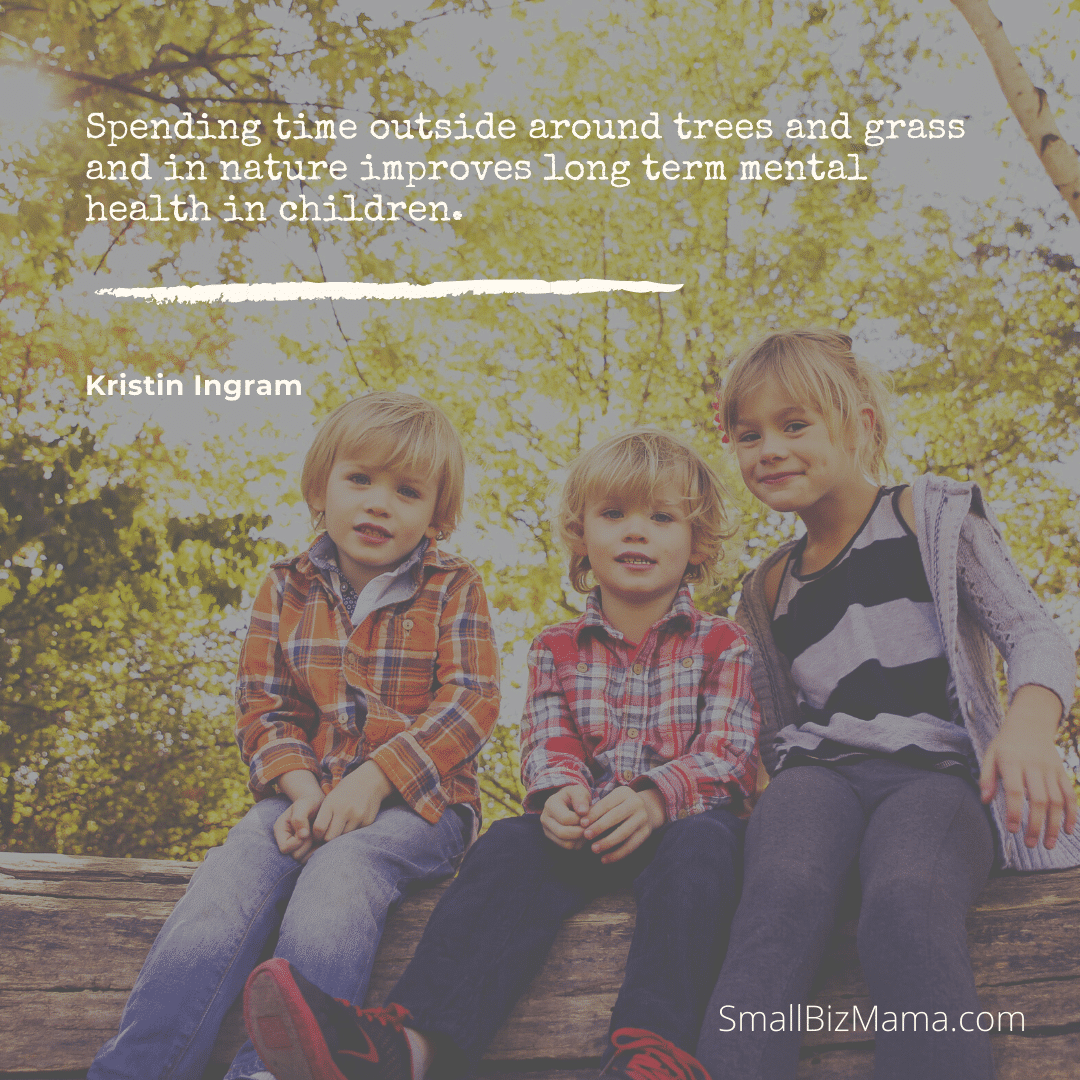 A lot of us know we should be doing more with our kids outside. When you start to look at the research, it is really compelling. There's a study that I found in Parents magazine, which shows that spending time outside around trees and grass and in nature, actually improves long term mental health in children. Think about your own experience when you go outside, you walk in the grass, or you're in the trees… it's good for your own mental health, too.

As an educator, as somebody who sat on a board of education, I saw that more and more of the creative time and outdoor time is being taken away from kids at school. Then they come home and they have all this homework and all these structured activities and they don't get time to just go outside and play, and I think it is critically important.

How to get your work done while your kids play outside

When parents ask me how they can get more done during the day, I say, drag your tablet outside with you or drag your laptop outside into the backyard, and sit in the backyard and let your kids play near you. It's a great way for your kids to play and explore. Don't do something that needs a hundred percent of your focus, but if you have little tasks, if you've got to make some graphics for social media, if you've got to go through your email, it's a really good way to get some more time.  I like to bring my planner out and I'll plan my week while Erik is playing outside. I'll respond to emails, I'll do some networking on social. All the while, I've got one eye on him, so I'm looking up and down the whole time, but it's great for him to be outside.

There's an interesting article on Harvard’s medical school website, Six Reasons Children Need to Play Outside, and they talk about how it's great for exercise, your kids are running around, getting some sunshine. Most people have a vitamin D deficit (make sure you put sunscreen on them), but it's good for us to be out in the sunshine. After the winter is over, living in Connecticut, it gets gray. And so, to just sit and, as The Fly Lady says, “get some sunbeams,” just sit in a sunbeam and soak it in. It feels so good.

Erik has started to do that. He'll go out in the sun and he'll put his face up in the sun, and just soak it in. It just is so good for them. I see Erik go outside and take risks. He'll stand up on a high point in the yard, and he will jump off of it. He will explore blades of grass and he loves sticks. I swear, I think he's got this Harry Potter streak in him where he sits there and he's got his little stick in his hand and he's waving it around like a magic wand.

Playing outside leads to great things

Playing outside leads to increased creativity, and it helps improve their executive function because they're playing in a way where they have to make the best of what they have. They're making decisions about things and they're looking at trees and what does the bark feel like on the tree? And they've got all these different colors of green that they're finding. They’re looking at the flowers which come in so many different colors and it's just such a cool thing. I love to watch him outside playing. It's so peaceful.

I actually think the less stuff you give them when they're outside the better it is because they're forced to make do with what they have around them. Erik will get some very small rocks, bigger than gravel, but little rocks in the landscaping and he'll grab a whole bunch then and sort them by color, or by size. It's so cool to see the little things that are going on in his head while he's out there.

I understand, sometimes it's hot, or we've got things to do, and we just wish that our children would play on the floor, so we could be on our computers, but I think that it's really important for us, as parents, to learn from our children. Sometimes I think we forget how good the outside is for us too.

Last night, we decided as a family that we needed to go for a walk. We have train tracks that run behind our house, but they're really hard to see once all the foliage starts growing. But if you walk 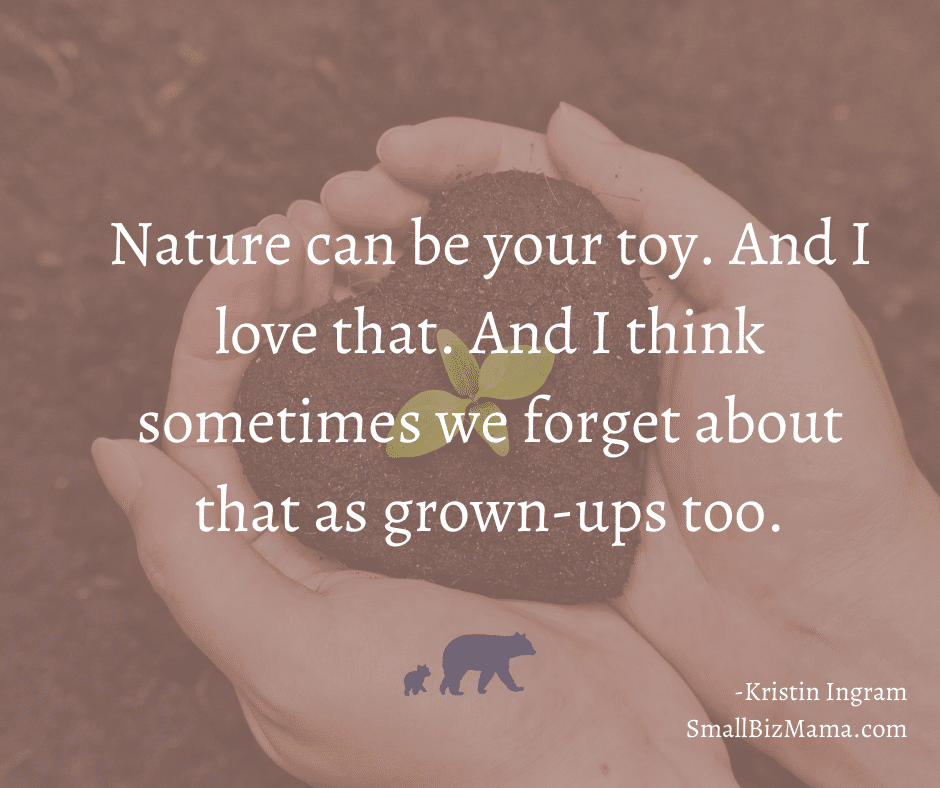 down the street a little bit, there's a railroad bridge. So we said, “let's walk the railroad bridge and see if we can see a train.” We grabbed the stroller and off we went. We did see a train, which made Erik really, really happy. When you go outside, you have new experiences that you cannot have in the house. Seeing a train on TV or playing with his little wooden trains is not the same as standing on a bridge and watching a train go under. He saw the train from one side and then, I said okay, turn around. And he looked down and the train was whooshing underneath us. He said “Ohhh it's the train. It's so fast.” We've gone to see trains before, but this was so cool for him because it was right there. So to be standing there and have the train go underneath us, it was just so cool.

After that, we asked him, do you want to go for more of a walk? And he's like, yeah, yeah, let's go do that. So, he got in his stroller and we ended up going for a walk. We saw a whole bunch of our neighbors, lots of people were outside, lots of people were doing work to their houses. We live in a very diverse community, and everybody's so friendly and everybody's checking in on each other, and it was really cool. And so, to be able to say hi to our neighbors and go for a walk was so nice.

Erik loves cars right now, so to be able to wave at cars, it's one of his favorite things in the whole world. We ended up going for a two and a half-mile walk. It was so nice. It was recharging to go out and do that. Erik was pointing out all sorts of things. At one point, we walked past a little wildflower and we walked past some long grass, so I gave him a piece of grass. He held onto that grass for a mile and a half. And he's picking at it, playing with it, picking out the little seeds and it was just cool.

I think a lot of times we think that we have to have this really busy backyard with swings and slides and all sorts of craziness and you really don't. I think the younger you start with kids bringing them outside so that they have an appreciation for it, the better. Sometimes Erik will just lay in the grass and look up at the sky and look at clouds. He's noticing clouds a lot now and just talks and what he sees in the sky…. is the sun out, is the sun not out, is it cloudy, is it not cloudy? And he's watching the trees, oh, mama look at the leaves and the trees. I think it's so much easier when kids are little to help them gain an appreciation of nature and being outside, and not having to have eight gazillion toys every time you go outside. Nature can be your toy. And I love that. And I think sometimes we forget about that as grown-ups too.

I hope that this was helpful. I hope that you will take your kids outside. Most of the experts that I read while doing the research for this episode said that kids should be outside at least three hours a day. We're striving to do better. I think we certainly hit that yesterday, but we definitely don't get that every day. Start with 15 minutes. That's all you need to start with. Just start with more than you're doing right now and see how it goes. Let me know in the comments what your kids are doing outside.

6 Reasons Children Need to Play Outside

​Disclosure: We professionally create this podcast that receives compensation from companies that we talk about. So you must assume that any link you click is an affiliate link. Kristin and Ingram Digital Media only have affiliate relationships with companies that we believe in wholeheartedly. We are independently owned, and all of our opinions are​ our own.

Episode 79: How weekly planning gave me my life back

​I am a Small Biz Mama. I own two businesses, a tax and consulting firm and a digital media company. In 2019, I founded Bookkeeper Training School, where I help moms create a full-time income while their kids are napping as virtual bookkeepers.

Please log in again. The login page will open in a new tab. After logging in you can close it and return to this page.

3 Secrets Busy Moms Are Using To Turn Into Highly Paid Bookkeeping Pros (While Their Kids Nap!)

(Even if you have NO experience and HATE numbers)! 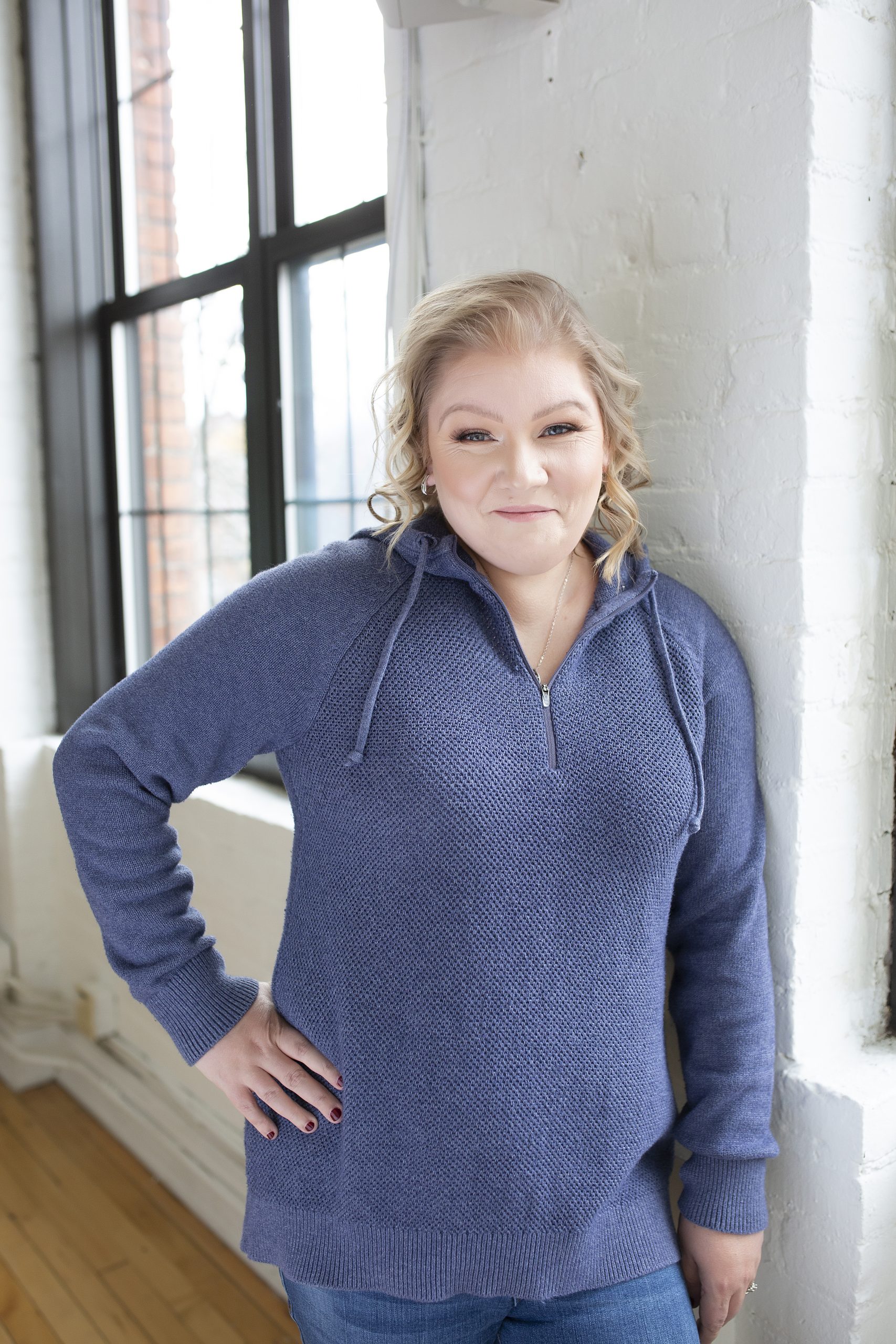 You can have enough time to spend with your kids at home without stressing over your finances. Let me show you exactly how to do it!

THIS IS A FREE TRAINING